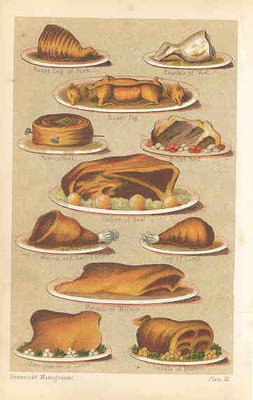 Bleu d’Auvergne ranges from bland to sharp. An appellation contrôllée cheese whose quality and taste can vary considerably, you can ask to taste it before you buy Bleu d’Auvergne.  Specific varieties of this cheese include the ancient Bleu de Laqueille.
Bleu de Bresse is not an appellation contrôlée cheese, but a French industrial dairy’s attempt to imitate the success of Danish blue. It’s a soft and almost spreadable cheese.
Bleu des Causses is an appellation contrôlée cheese which is generally delicious and strong-tasting, without being sharp. A cows-milk cheese, sometimes quite crumbly, manufactured in the same area as Roquefort and quite similar tasting.
Bleu de Gex is a blue from the Swiss border, rather hard and not very strong.
Fourme d’Ambert is a mild blue cheese from the Auvergne, often with an almost nutty flavour. No one should find this too strong.
Roquefort is the most famous of France’s blue cheeses, though not necessarily the best. Roquefort is an appellation contrôlée cheese, made from the milk of one single breed of sheep, the “Lacaune” breed. The cheese has been made since the Middle Ages, and has been famous for many centuries; more recently it has been the object of intense and successful marketing, making it into a virtually industrial product. Over 18,000 tons of Roquefort are manufactured each year, and the cheese is exported worldwide. Though made in the “causses” mountains of southern France, in the department of the Aveyron, and matured in caves, a lot of the milk used in the making of Roquefort is imported into the region.
Other Cheeses
Goats’ Cheeses:
Crottin de Chavignol, Valençay
There are dozens of different goats’ cheeses, and many local producers market their cheese under their own local village or regional name. Goats’ cheeses can be sold either very young (frais), when they are soft and spreadable, medium matured, when they are still soft, but not spreadable, or fully matured, when they are hard.
Ewe’s Milk Cheeses:
Ineguy is a pressed cheese from the Basque country, similar to other southern European ewe’s milk cheeses, such as Pecorino Romano from Italy.
Some Modern Dairy Cheeses
Saint Agur (a soft blue cheese, made in the Auvergne), Brillat-Savarin, an almost buttery soft cheese, Roulade, Saint Albray, Port Salut, Boursin, a cream cheese containing herbs and garlic.
Raclette
Raclette is a mass-produced industrial cheese designed for a “raclette”, i.e. a meal in which thin slices of cheese are heated and melted then poured over baked potatoes and eaten with gherkins, mountain ham and other accompaniments. Raclette is an easy and convivial meal, where everyone serves themselves from the raclette grill which is placed in the middle of the table. (Traditionally, the cheese was melted in front of a hot wood fire). However, “raclette” cheese is not the best cheese for a raclette. I prefer Comté (the best) or  Cantal.
Generic Terminology:
The words “tomme” and “fourme” are generic words that can describe several different types of cheese. Etymologically, the French word for cheese, “fromage” is a diminutive version of the word “fourme”.
Unusual CheesesCancoillotte is a very distinctive cheese that comes from Franche Comté; it is a runny cheese strongly flavored with garlic, and is very much an acquired taste. It can be eaten cold or hot.
Remember to always serve cheese at room temperature, because cheese has a high fat content, which needs to become softer to be flavourful.
Below, French Cheeses: the Image is Originally from Cook’s Magazine