The Health-Benefits of Salt 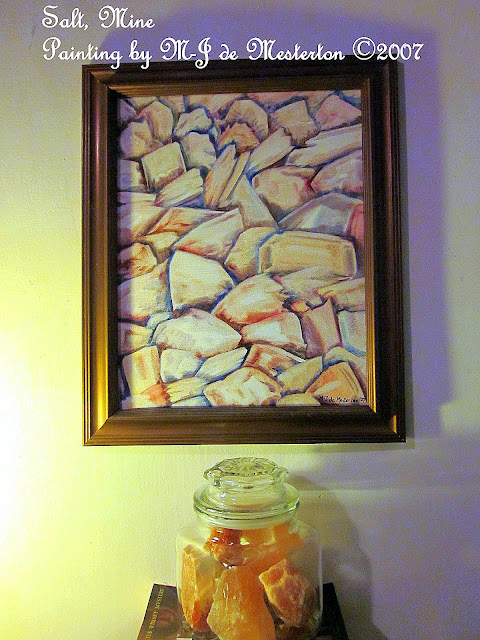 Himalayan Salt Painting by M-J de Mesterton ©2007;
Himalayan Salt Chunks (Click Here for M-J's Himalayan Salt Source)
It has been determined that gargling with salt-water reduces one's risk of acquiring colds and flu by 40%.
Dissolve a teaspoon of salt in six ounces of warm water and gargle a couple of times per day after a sore throat begins, or when you believe you have been exposed to rhinovirus and/or influenza. Gargling with salt will soothe a sore throat by drawing-out moisture, thereby taking down swelling. ~M-J de Mesterton
Salt and Health
(from The Salt Institute–edited by M-J for clarity)
Salt is essential not only to life, but to good health. It’s always been that way. Human blood contains 0.9% salt (sodium chloride) — the same concentration as found in United States Pharmacopaeia (USP) sodium chloride irrigant commonly used to cleanse wounds. Salt maintains the electrolyte balance inside and outside of cells. Routine physical examinations measure blood sodium for clues to personal health. Most of our salt comes from foods, some from water. Inadequate salt can be problematic. Doctors often recommend replacing water and salt lost in exercise [see advice on maintaining hydration for weekend athletes, bodybuilders, professional athletes and outdoor athletes such as marathon runners and ultra-endurance athletes, and for those people working outdoors. Wilderness hikers know the importance of salt tablets to combat hyperthermia. Oral rehydration involves replacing both water and salt. Oral Rehydration Therapy (ORT) has been termed, by the British Medical Journal “the most important medical advance this (20th) century.” Expectant mothers are advised to get enough salt. Increased salt intakes have been used successfully to combat Chronic Fatigue Syndrome. The unique microclimate of salt mines is a popular way to treat asthma, particularly in Eastern Europe. Dramatic deficiencies (e.g. “salt starvation” in India) or “excessive” sodium intakes have been associated with other conditions and diseases, such as hypertension and stomach cancer. Testing the salinity of perspiration is a good test for cystic fibrosis; scientists suspect that cystic fibrosis is caused by a deformed protein that prevents chloride outside cells from attracting needed moisture (and, of course, we cannot forget that iodized salt is the choice of public health professionals to combat iodine deficiency, has been fortified to battle other diseases like lymphatic filarisis, and is considered “the first antibiotic”).