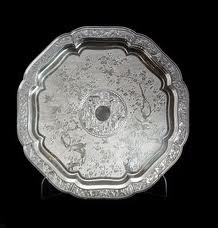 ALLOY: a metal resulting from the mixture of two or more metals.

APOSTLE SPOON: a popular christening gift during the Middle Ages was an Apostle Spoon, adorned with a miniature statue of one of the Twelve Apostles. Normally relatives and friends would give these gifts in a full set of twelve. Sometimes a thirteenth spoon was added, bearing a miniature statue of Christ.

APPLIED BORDER: a cast or rolled wire border or edge soldered on an article.

ASSAYING: the process of determining the fineness or the constituents of a metal or alloy.

BALANCED PLATING: Oneida Silversmiths' exclusive silverplating process which deposits 50% more pure silver on the back of each piece than on the front. This additional silver protects the area most subject to wear.

BRIGHT FINISH: The finish that imparts to metalware a highly polished, mirror-like surface.

BRITANNIA SILVER: a quality recognized in England, but not in the U.S., as requiring .9584 parts silver.

BRITANNIA WARE: sometimes called Grade A Pewter. It consists of tin, antimony, and copper. Widely used in the mid-part of the 19th century for ornate holloware, it can now used as a base metal in the modern plated holloware industry.

BUTLER (OR SATIN) FINISH: the care of silverware was one of the duties assigned to the English butler. In the course of years of hand rubbing, the silverware took on a distinct luster which today, in modern flatware, is simulated by a process of manufacture known as "Butler Finish". This finish is sometimes called Grey Finish or French Grey Finish. Each may show a varying shade of soft finish, but both fall under the general category of Butler Finish as here described. The finish on flatware is produced by buffing, or polishing the article with different kinds of abrasives. The various terms applied to soft finish are more particularly a trade convenience to indicate the abrasive used rather than to describe standard shades or tones.

CAST BORDER: an applied border made of cast silver.

CASTING: the process of pouring molten metal into molds and so reproducing the models from which the molds were made. These reproductions are called castings.

CHASING: hand-decoration accomplished by small tools and punches which are driven into the metal by means of delicate hammer taps. When flowers, scrolls, etc., are simply impressed into flat surfaces it is called Flat Chasing. When the ornamentation is brought up in high relief by driving out the metal from the inside and then modelled back into detailed form it is called Repousse Chasing.

CUT-CARD: a decorative technique similar to applique work in sewing. Thin sheets of silver are cut into patterns which are then applied as ornamentation.

DIE CUTTING OR SINKING: The process by which a design or pattern is cut out of a piece of steel to form a "die" from which a quantity of similar articles can be stamped out or impressed.

ELECTROPLATING: the process was introduced about the year 1842 and is used in making silver plated ware. By this process a layer of silver is electrically deposited on a base metal. (Silverplate).

EMBOSSING: the process of decorating by striking or impressing the metal into a die with force.

ENGINE TURNING: The process of decorating through means of a cutting tool controlled by a craftsman following the design which is applied to the silver from a master pattern or stencil.

ENGRAVING: a process of hand decoration produced by cutting into the surface of the metal with engraving tools.

ETCHING: a process of decoration produced by what might be properly called "chemical engraving". The silver is covered with a protective coating through which the desired design is cut and the design is eaten into the silver by nitric acid. Electrolysis marking by the "Electromark" process produces permanent mark on metal - no acids used. - Black mark if AC is used - White mark if DC is used.

FINISHING: the general term applied to the various processes of polishing silver.

GILDING: The process of applying a layer of pure gold on another metal.

GOLD ELECTROPLATE: articles made of a non-precious metal on which is deposited pure gold by the process of electroplating. Federal standards require a thickness of at least 7 millionths of an inch of at least 10K gold.

H.H.: stands for "hollow handle". These handles are made of two hollow halves soldered together.

HALL MARK: the official mark of the Goldsmith's Company or other assay office or "Hall" in England, stamped on articles of gold or silver to indicate their purity. In America the Hall Mark is the word "Sterling" accompanied by the name or mark of a reputable manufacturer.

HAMMERED SILVER: a form of decoration resulting from repeated taps on the surface of the metal with a light hammer.

HAND WROUGHT SILVER: an article shaped and decorated from a flat piece of silver by a craftsman using only hand tools and such other non-mechanical aids as facilitate the use and manipulation of such hand tools. In the production of much so-called "hand wrought" silver the identical mechanical processes used in the initial shaping of the article in the normal course of silverware production are followed - and in these cases the term "hand wrought" is incorrectly applied.

HOLLOWARE: the trade reference to tea and coffee services, trays, beverage pitchers, candelabras, or any other piece that serves as a container or means of conveyance.

INSULATORS: heat-resisting substances inserted between the handle and the body of such articles as kettles, teapots, etc.

KNURLING: an ornament cut originally into steel rolls and then impressed from these rolls into the silver as borders on
bowls, dishes, etc.

LAPPED BORDER OR ROLLED EDGE: an article is said to have a rolled edge or lapped border when the metal has been rolled over the edge and spun under to give the effect of a rounded edge.

MONOGRAMMING: a once-common practice of adding initials to flatware and holloware.

MOTIF: the dominant feature of a design.

MOUNTS: small pieces of ornamental metal. These may be ornamented wires, casts or stamped silver soldered on the article as decorations.

NICKEL SILVER: contains no silver at all. A composition of copper, nickel and zinc. OVERLAY: A special overlay of additional silver at points of greatest contact for maximum protection.

OXIDIZING: method of accentuating and enhancing the beauty of ornament by the application of an oxide which darkens the metal whenever applied. Some methods of cleaning silver will remove this oxide.

PATINA: the finish or surface texture. As applied to silver, it refers to the soft lustrous finish the metal acquires with years of usage.

PEWTER: a soft greyish-colored alloy having tin as its chief.component. Originally used as an alternative to sterling prior to the invention of silverplate.

PIERCING: a form of decoration produced by cutting away parts of the metal with cutting dies, punching tools, or in the case of hand piercing, with a thin steel blade with fine teeth.

RAW EDGE: aerm applied to holloware pieces the edges of which have not been turned over or mounted with a border.

SHEFFIELD PLATE: the original substitute for Sterling Silver, now displaced by Silverplate. It was made by fusing sheet silver onto copper, rolling and manufacturing into holloware. The discovery of the electrolytic process of depositing silver on the base metal made it possible to produce articles of similar quality to Sheffield at lower cost and so the Sheffield Plate process was virtually abandoned (circa 1840). Today, most fine pieces of "Old Sheffield" aren't available in the commercial market. Much electroplated ware is erroneously advertised or otherwise referred to as "Sheffield Plate". In the purchase of "Sheffield Plate", be sure of the reliability and integrity of your dealer.

SILVERPLATE: articles made on a non-precious metal on which is deposited pure silver by the electroplating process. SILVERSMITHING: General term applied to the various crafts involved in making articles of silver.With advancing specialization in the manufacture of sterling ware, the term has narrowed down to cover specifically the crafts involved in shaping, fitting, and assembling the various parts of an article into a complete piece.

SPINNING: a method of forming or shaping pieces of silver or pewter holloware by revolving a flat disc of the metal over a piece of wood or steel which has been made in the shape of the silver it is to assume. By means of a tool, the silver is spread over the rotating form, finally achieving the desired shape.

SPLADE: a combination knife, fork and spoon, most common in Australia.

STERLING SILVER: the word "Sterling" is the best known and most respected marking in use today. Pure silver alone is too soft for everyday use. Copper is the metal commonly used to give "Sterling" its added stiffness and wearing qualities. Sterling is often referred to as solid silver. It is composed of 925 parts pure silver in every 1000 -- this proportion never varies -- it is fixed by law.

TARNISH: a discoloration that can build on silverplate or sterling if left exposed to the air or if brought into contact with certain foods and chemicals. Can easily be prevented by everyday use or protective storage and is easily removed by commercial silver polishes.