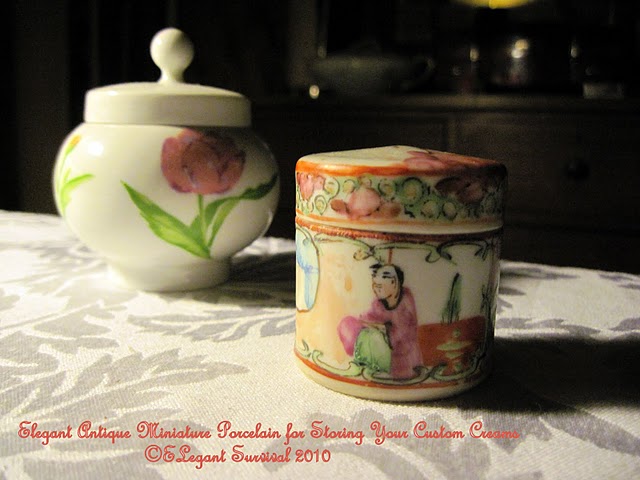 Celadon
(Pronunciation: "sel-uh-dahn") Ceramic with an iron oxide glaze fired in a reduction atmosphere, producing range of colors from yellow to grey-green, olive, blue, or blue-green.

Ch'ing-Pai
(Pronunciation: "CHING-bye") A popular early porcelain covered with a thin, lustrous glaze that ranged in color between light blue and white.

Ch'ing-te-chen
(Pronunciation: "CHING-duh-ZHUHN") A city in southeastern China (Kiangsi province) which became the center of porcelain production for China and much of the world.

Earthenware
Any type of ceramic that remains porous (not waterproof) when it has been fired (baked) in a kiln.

Glaze
A shiny glass-like layer baked onto the surface of an object made of clay, used to add color or make the object waterproof.

High-Fired
A ceramic that is fired (baked) at a very high temperature, generally producing a very durable material.

Iron Oxide
One of several chemical compounds formed of iron and oxygen, often lending a reddish color to a substance.

Kaolin
(Pronunciation: "COW-lin") A very pure white clay that is one of the main ingredients in porcelain.

Kuan
(Pronunciation: "GWAHN") Ceramics produced by the Imperial kilns in present-day Kaifeng and Hangchou, made with a dark iron-rich clay covered with a thick translucent, pale blue-gray glaze. A distinguishing feature of this refined ware is the crackle pattern of its glaze, which was purposely induced during the cooling process.

Low-Fired
Ceramic that is fired (baked) at a comparatively low temperature, generally producing a porous (non-waterproof) object unless glazed.

Lung-Ch'uan
(Pronunciation: "LOONG-chwahn") The most refined greenware of Sung dynasty China, manufactured at several sites in southwestern Chekiang. It evolved as a beautiful blue-green tactile glaze on a fine, durable porcelain body.

Ming-ch'i
(Pronunciation: "MING-chee") Chinese burial sculptures—"spirit articles"—that were placed in tombs to accompany and protect the dead in the afterlife.

Monochrome
Consisting of, or decorated with, only one color—such as celadon or Ting ware.

Overglaze
Color that is applied after an object has been fired once in the kiln.

Oxidation
A firing process in which extra oxygen is present in the kiln to change the chemical composition of the glazes on clay objects while they are being fired, producing a range of special effects.

Porcelain
A fine-grained clay that is fired at high temperatures to create a white, non-porous, and extremely hard ceramic ware. First produced in China about 900 A.D. during the T'ang Dynasty.

Reduction Atmosphere
A process in which the kiln is sealed from the outside in order to deplete the oxygen during firing, used to control chemical reactions in the glaze to produce a range of special effects.

San-Ts'ai
(Pronunciation: "SAHN-tsye") The "three-color" ware that furnished the tombs of the aristocracy for more than a hundred-and-fifty years of the T'ang dynasty.

Sgraffito
(Pronunciation: "skrah-FEE-toh") A method of decoration where designs are produced by scratching or cutting away parts of a top layer (such as a glaze or slip) to form a pattern by revealing a contrasting color or texture underneath.