Turmeric for Longevity and Health

Pronounced "tuRmeric" not "tumeric," this spice is used in India and Japan for health and longevity. Turmeric can be used in cooking, or ingested in capsules. Turmeric is a well-researched anti-inflammatory agent, as well as a powerful antioxidant. Inflammation is the root of most ills and degenerative conditions in the human body.
©M-J de Mesterton 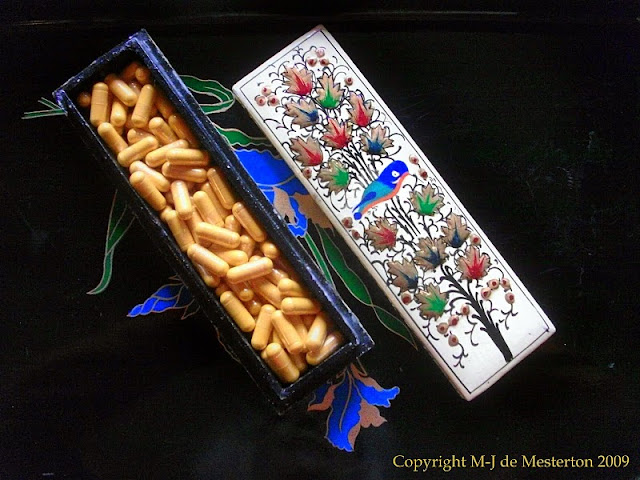 The 2001 book, The Okinawa Program by Bradley J. Willcox, M.D., D. CraigWillcox, Ph. D., and Makoto Suzuki, M.D., is based upon the25-year-long Okinawa Centenarian Study. It is one of my favorite diet and health books.Turmeric has recently garnered respect and much publicity as a medicinal plant from the ginger family. The qualities of turmeric are not news to the famously long-living people of Okinawa, as related on page 149:
Excerpt:
Ucchin, or Turmeric M-J’s pronunciation note: TER-mer-ick
(Curcuma longa, Jiang Huang, Curcuma, Indian saffron, Ukon, Valerian)
Ucchin,commonly known in North America as turmeric,  is one of the Okinawans’ favorite herbs (as it is in India), and claims a multitude of health benefits. It’s known as ukon to the Japanese….
Folkloric Claims
Turmeric is from the ginger family. The stalk of the plant is the part most commonly used in both herbal and traditional medicine, and is the part that provides the distinctive yellow-orange powder that adds flavor and color to curry. It was probably brought to Okinawa centuries ago from India, which had active trade relations with the Ryukyu Kingdom (as Okinawa was formerly known). In Ayurvedic medicine…turmeric is thought to strengthen the immune system, relieve inflammatory conditions such as arthritis, improve digestion, relieve gas, killl parasites and worms, alleviate menstrual problems, dissolve gallstones, and relieve other ailments. The Okinawans are in full accord with these claims, and highly prize their turmeric.
Excerpt, page 150
Turmeric possesses significant antioxidant properties, comparable to those of vitamins E or C, which is probably why it proves powerful against cancer. The American Institute for Cancer Research has reported somedegree of inhibition for cancers of the GI tract, including oral, esophageal, stomach, and colon cancers. And, there is further evidence for its effectiveness against breast and skin cancers.
~~M-J de Mesterton, August 2009
Labels: anti-inflammatory antioxidant Elegant Survival not tumeric turmeric Turmeric Health Turmeric Longevity Turmeric Okinawa Diet