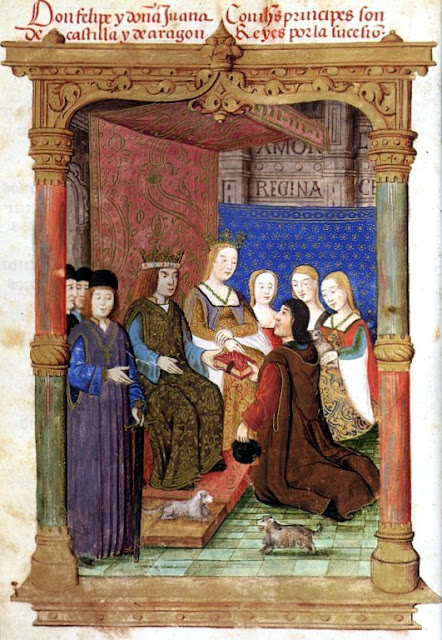 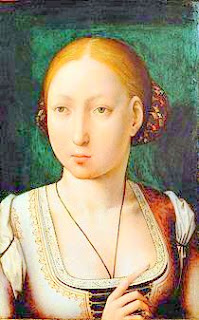 A myth created by her sick husband and perpetuated by her father, who was trying to issue a replacement-heir by his second wife, Germaine, that Doña Juana was "mad," kept her from long-term power. "Juana la Loca" was very well-educated. The princess, countess and queen was an excellent student of court etiquette, dance, music, and equestration. Doña Juana--Joanna--was fluent in French, Latin and all of the Iberian Romance languages: Castilian, Leonese, Galician-Portuguese and Catalan.
©M-J de Mesterton

Uniting the Crowns of Castile and Aragon

The marriage of Ferdinand II and Queen Isabella I of Castile, in 1469 at the Palacio de los Vivero in Valladolid, began a familial union of the two kingdoms. They became known as the Catholic Monarchs (los Reyes Católicos). Isabella succeeded her brother as Queen of Castile and Ferdinand became jure uxoris King of Castile in 1474. When Ferdinand succeeded his father as King of Aragon in 1479, the Crown of Castile and the various territories of the Crown of Aragon were united in a personal union creating for the first time since the 8th century a single political unit referred to as España (Spain). 'Los Reyes Católicos' started policies to diminish the power of the bourgeoisie and nobility in Castile, and greatly reduced the powers of the Cortes (General Courts) to the point where they sanctioned the monarchy's acts, and brought the nobility to their side.

On Isabella's death in 1504 her daughter, Joanna I, became Queen (in name) with her husband Philip I as King (in authority). After Philip I's death in 1506, Joanna's father Ferdinand II was regent, due to her perceived mental illness, as her son Charles I was only six years old. On Ferdinand II's death in 1516, Charles I was proclaimed as king of Castile and of Aragon (in authority) jointly with his mother Joanna I as the Queen of Aragon (in name).[3] He became known as Charles V. As the first royal to reign over both Castile and Aragon he may be considered as the first operational King of Spain.

As with all medieval kingdoms, supreme power--the Divine Right of Kings-- was understood to reside in the monarch "by the grace of God," as the legal formula explained. Nevertheless, rural and urban communities began to form assemblies to issue regulations to deal with everyday problems. Over time, these assemblies evolved into municipal councils, known as variously as ayuntamientos or cabildos, in which some of the inhabitants, the property-owning heads of households (vecinos), represented the rest. By the fourteenth century these councils had gained more powers, such as the right to elect municipal magistrates and officers (alcaldes, speakers, clerks, etc.) and representatives to the parliaments (Cortes).
Due to the increasing power of the municipal councils and the need for communication between these and the King, cortes were established in the Kingdom of León in 1188, and Castile in 1250. In the earliest Leonese and Castilian Cortes, the inhabitants of the cities,  commonly called laboratores  (workers),  formed a small group of  representatives who had no legislative powers, but served as a link between the king and the general population, a social mechanism instituted by the kingdoms of Castile and León. Eventually, representatives of the cities, or las ciudades, were granted the right to vote in the Cortes, often in alliance with the monarchs against the grandees or great noble lords.

The Kingdom of Castile Canting Arms

During the reign of Alfonso VIII, the kingdom began to use as its emblem, both in blazons and banners, the canting arms of the Kingdom of Castile: gules, a three-towered golden castle, masoned sable and ajouré azure.