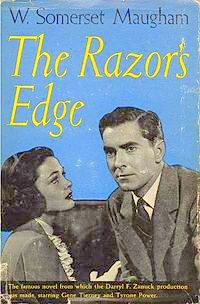 The Razor’s Edge is a book by British author W. Somerset Maugham, which was published in 1944. Its epigraph reads, "The sharp edge of a razor is difficult to pass over; thus the wise say the path to Salvation is hard." taken from verse in the Katha-Upanishad.

The Razor’s Edge tells the story of an American pilot traumatized by his experiences in World War I, who sets off in search of some transcendent meaning in his life. The novel is based upon the life of Guy Hague, an American mining engineer, whom Maugham met during his time in the United States and later on in Paris.

A brilliant, beautiful movie was made in 1946 by Darryl F. Zanuck from Somerset Maugham's searching, realistic yet mystical book. The Razor's Edge film stars Tyrone Power, Gene Tierney, Clifton Webb, Ann Baxter and John Payne. Without giving away plot, I recommend this film highly as an Elegant Survival classic.