The Merits of Wearing Gloves
by M-J de Mesterton, 2006

The Merits of Wearing Gloves, and the Scourge of Staphylococcus Aureus

I first posted this little piece about wearing gloves in December, 2006:
I had worn long kid gloves to an evening holiday party, and my husband wore elegant gloves as well. A young lady commented favourably on our style. I spoke briefly about the merits of wearing gloves, expressing the hope that it would again become routine. I mentioned the scourge of staphylococcus aureus, whereupon she held up her hand with its missing finger--lost to the superbug!
For years, I was regarded as an oddball simply for wearing driving gloves. I also wore gloves at the supermarket to ward-off transference of germs on carts, et cetera*. I've read somewhere recently that glove-wearing is back in style. I hope that's true.
*I also wash every grocery item which enters our house.

I have been writing about this for six years, and no doubt some people have scoffed. Eyes glaze over when this subject is mentioned, and the speaker is written-off as a germophobe.
That attitude seems to have changed overnight. MRSA, or antibiotic-resistant Staphylococcus Aureus isn't just a hospital-acquired disease anymore. Elegant Survival's Face and Figure page alludes to the intrinsic unhealthiness of health-clubs and public gyms. The noise level of the "music" played can deafen you, and the transmission of germs and viruses on the surfaces there may sicken. However, I wanted to be a bit delicate and not graphic, so I determined to return to the topic with a well-crafted, diplomatic way of saying, "If you value your health, stay out of health-clubs!"

I belonged to three such clubs in the past, beginning with the old Henry Hudson Health Club on 57th Street in New York City. I was disgusted when, using the women's sauna, I found the panties of other members hanging up to dry in there. Being of Scandinavian descent, this abuse rankled; I also knew that moisture in the sauna ("sow-nah" is the correct pronunciation) would defeat their idiotic purpose. I cleaned-off every piece of gym equipment before use, using rubbing alcohol. It has been thirteen years since I have darkened the door of one of those clubs, because the noise got louder and the germs deadlier. Now, my logic has borne out, with the major press agencies finally giving the flesh-eating disease MRSA, or antibiotic-resistant Staphylococcus Aureus (staphylia means "grapes" in Greek--the virus is shaped like a bunch of them), the attention it deserves. Human nature usually demands that someone die before a danger is recognised, but there have been more deaths from this than the AIDS virus, going unnoticed until now.

My husband and I, as I am fond of telling you, wear gloves everywhere we go, unless it is very hot weather. We keep hand-sanitizer in the car and in our bags. Consider the objects one must handle outside the home, in public--pens, products, door-handles--there's an infinite variety of things which can bear germs and viruses. If you don't like to wear gloves in public, at least use something to clean the shopping cart handle when you're marketing. Some supermarkets offer them in a dispenser near the carts.

Thoughtfulness in life, and keen awareness of our surroundings and habits, can help us survive even the most rampant modern scourge. After all, carelessness wrought by jaded arrogance has created just that: a deadly epidemic.
©M-J de Mesterton 2006
Posted by M-J de Mesterton, 2006 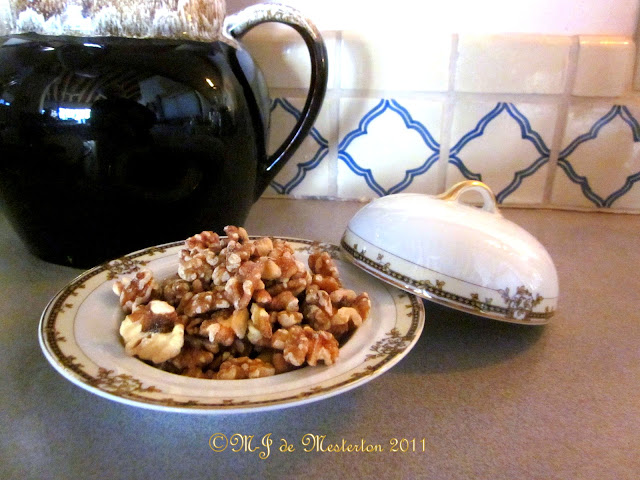